The Axe. The Window. The Board.

I awaken in my dream.

In a beautiful public square, skyscrapers surround me.

A proud capital filled with people hustling and bustling.

The sun is shining down as though everything is right in the world.

A concert? A fair? Business as usual?

I look down to see my hands clutching a two-foot wooden board.

How I got this, I don’t even know.

I inspect the foreign object.

Horror grips me as I see what is mounted on the other side of the plaque in my hands.

I am looking at the misshapen face of a tiny human I will never forget,

One who never once saw the light of day.

The final moments of her short life are written on her closed eyes and furrowed brow, telling me a story of injustice.

There is no escape.

Because I hold her in my own hands, mounted on this piece of wood.

I recoil in fear.

The people, they will see me holding this baby and label me a lunatic!

But enough about me; what about her?

How can I escape her story … and the stories of those like her, whom I will never lay eyes on?

Someone must care about this.

I begin walking up to strangers, inviting them to look at this baby.

They look at first from a distance.

“This is what’s happening to the babies,” I say. “They’re being killed.”

As I show more and more people, a transformation takes place.

They study the baby on the board,

Then, I am startled by a man with his hand outstretched,

Wanting to touch the baby.

I look again at the baby’s face and notice that her painful grimace has slightly relaxed.

People who watched what the man has just done follow after, each taking their turn,

Daring to touch this tiny member of the human family.

We can all see.

We can all feel.

Babies weren’t created to die this way; they are meant to be loved.

The change continues in the people as they reach out to the baby.

Remarkably, the baby is filling out,

Until finally, at the dream’s end,

Her plump cheeks pink, her small face resting near my heart.

I suspect it was love that changed her. 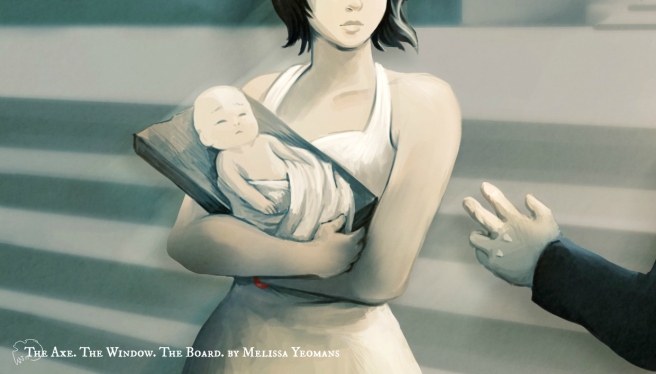 (Lament against the Spirit of Abortion)

Stuffing into containers soulless vessels, who were too small to cry out.

Lest anyone arise to their defense.

Intentionally flushed out of wombs,

As if wombs were mere toilets.

Your lies have gone a long way, amassing mounds of victims,

Among the living and the dead.

With many drudges carrying out your commands,

Your army unknits what the Master is knitting.

Your army looks the other way.

How many hearts have you stopped?

We have lost count long ago.

But the One who cares for each fallen sparrow has surely taken notes.

You possess not the power of the last word.

who recognized his humanity and testified on his behalf, and all those who aided

in bringing him and the other babies into the light.)

At first glance, this dream may seem like a call to brandish images of abortion victims in the streets. It is not. There is a different way.

While considering my belief, please remember that I share this not in judgment of differing techniques or approaches.

Who can best help us see and reach out to touch these broken babies with our hearts but the ones who have seen them?

It is the former clinic workers who have witnessed the babies’ bodies and deaths firsthand. They have shown us what we needed to see behind the clinic walls, helping us understand what abortion does to the human body and the human soul.

We need to have the courage to face what they have revealed and learn the truth of what has been hidden from us. We must amplify their voices as they cry out, “The babies matter too. They cry too.”

Former clinic workers share that one of the hardest aspects of leaving the abortion industry is coping with the isolation and painful memories caused by participating directly in abortion. Like soldiers returning from the front lines, many struggle with triggering sounds, smells, and nightmares and memories: sounds of the blenders used to prepare the bodies for disposal, the distinct smell of abortion, the quiet sobbing of women in the recovery room, rushing grieving women out the doors, the realization of the heaviness and darkness that was with them until they got out of the abortion industry …

It isn’t just because medical procedures are naturally gruesome. It goes far deeper than that. Abortion is the only “health care” that involves the violent and intentional taking of a human life.

This is one of the reasons often stated by clinic workers for leaving the abortion industry. They are no longer willing to participate in taking the lives of preborn children. One example of many is the cofounder of National Abortion Rights Access League (NARAL), Dr. Bernard Nathanson.

Dr. Nathanson helped to build the powerful abortion industry and bring about the legalization of abortion (even aborting his own son or daughter with what he expressed as a feeling of pride for his skill in performing abortions).

After becoming pro-life, he claimed he was converted to the side of truth and was convicted to fight against the lies he himself plotted to deceive the nation with concerning the preborn. He created the short film The Silent Scream, which documented the response of a twelve-week-old baby during an abortion procedure.

His story can be found in his book The Hand of God: A Journey from Death to Life by the Abortion Doctor Who Changed His Mind.

It is important to note that Dr. Nathanson was an atheist through the time of promoting abortion and converting to pro-life (although, looking back on his life after later becoming a Christian, he sees the “hand of God”); he was convinced not by religious conviction but by the science of fetal development and the generally accepted principles of the rights and human dignity of the human person.

Although many doctors and clinic employees initially believed they were sparing women from health complications due to lack of access to legal abortion, their hearts have been stirred to protecting the unborn and protecting women from abortion.

Because of What They Have Seen and Experienced!

After sorting through fetal remains or witnessing an ultrasound-guided abortion, the humanity that clinic workers have observed firsthand is undeniable. (Sarah’s testimony, “It is a baby.”)

Surely, if these little ones were given a chance, they would touch our faces, even kiss away our tears.

Let us restore to them the place that was stolen from them. Let those little ones who have already been taken lie in peace, knowing our love, holding our sincere repentance, while we honor and remember lives ended by abortion.

If you are thinking about exiting the abortion industry, there is confidential help available from those who once stood in your shoes. Please reach out to abortionworker.com.

Another former abortion provider, Dr. Anthony Levatino, OBGYN, presided over 1,200 abortions before having a change of heart. The infertility of his wife, followed by the tragic death of his adopted daughter, led him to view each child he aborted as someone else’s precious son or daughter. He has testified before Congress about the brutality of abortion. To conclude his testimony, he quotes former president Barak Obama: “If there is just one thing we can do to save one child, then we have an obligation to try.” Dr. Levatino has devoted his life after conversion to trying.

In 2016, Lila Rose of Live Action interviewed him to create a video series to educate the public with his extensive knowledge. Here is that series:

A Conversation with a Former Abortionist

There is also an undercover journalist who risked everything to touch the face of the preborn. David Dalaiden (along with his partner, Sandra Merrit) spent years infiltrating the “Products of Conception” labs inside abortion facilities and recording with hidden cameras the truth about the baby bodies parted out for profit. He recorded top abortion industry personnel sharing in plain words over meals what abortion does to the bodies of the babies. While David and Sandra have been persecuted with lawsuits for exposing these truths, they wish no harm upon the industry workers; instead they compassionately pray for their conversion.

The complete, edited and unedited, footage is available for all to see here: Center for Medical Progress.

The Walls Are Talking by Abby Johnson

Gosnell: The Untold Story of America’s Most Prolific Serial Killer by Ann McElhinney and Phelim McAleer. (I highly recommend viewing the Gosnell film once it is released. I had the opportunity to see a prerelease screening of the film. It was impartially written and insightful on so many levels.)

What Do Rape Victims Say About Their Pregnancies by Stephanie Grey